(This is part 8 of the “Stages of the Anthropocene, Revisited” Series (SotA-R).)

(This post was updated on July 28.) — Earlier this year I found a serious error in the equations I was using to calculate warming due to carbon emissions. As explained in March, this meant that the climate/society feedback models presented in the previous three episodes in this series were all wrong, and thus that I needed to patch up the latest iteration of those models. The result of that “patching up” is model 4, which is mostly identical to model 3. The only differences are the corrected equations for calculating atmospheric carbon and warming, and an extension of the model to 2100 (previous versions ran until 2080).1 Since some time has passed since the previous episode, it might be a good idea to briefly explain the nature and purpose of the model.

Standard climate models ignore social feedbacks. They depend on extremely simplified scenarios of society and the economy and don’t take into account that the changing climate will change social, economic, and political conditions, which will affect emissions and thereby climate change in turn.2 The reason for this is obvious: these models are climate models built by climate scientists. Modeling social change is social science, rather than climate science, and thus outside climate scientists’ area of expertise. What is needed to predict the future is a model of the interactions (or feedbacks) between relevant aspects of society and climate change. Since, human geography is the science that (at least traditionally) is concerned with the interaction between humans and their physical environment, such a model could be called a “geographical model”.3

The various iterations of the model in this series are all based on the same conceptual model developed in episodes 4 and 5. The following diagram is a simplified representation of that conceptual model: 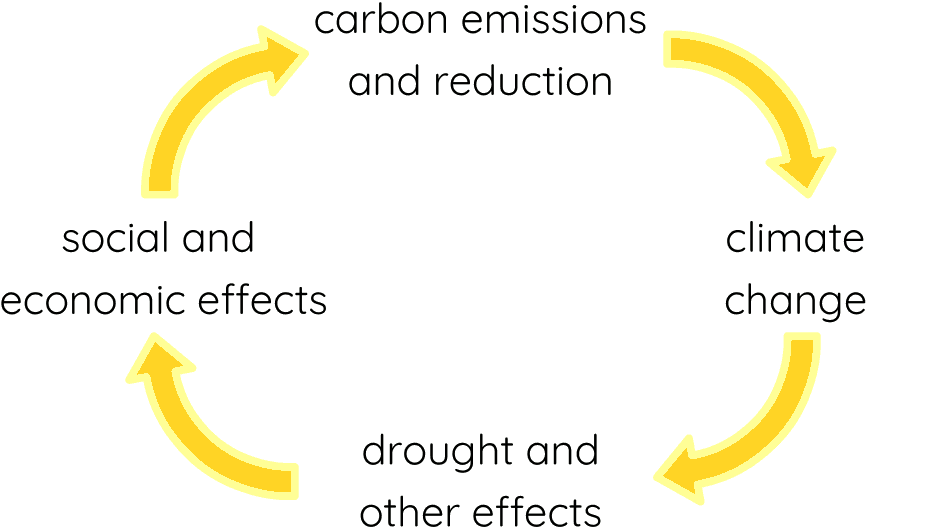 Starting at the top of the figure: carbon emissions lead to an increase in atmospheric carbon, which lead to climate change. Climate change involves higher average temperatures, but also a number of other effects and an increase in the occurrence of “natural” disasters such as droughts and storms. (Drought is by far the most important of these effects.) These various climate effects lead to displacement of people, food and water shortages (famine), increases of societal stress and unrest, and so forth. All of these have economic effects in turn (and vice versa – there are many feedback loops in the model), and finally, it is the state of the economy and the level of economic growth that primarily determines carbon emissions and changes therein. Additionally, the model takes policy, public opinion, international trade, technological change, carbon capture, and a host of other variables into account, and almost all of the effects and settings of the model can be changed by inputting a different value for a certain model parameter.

The spatial level of the model is that of countries. There are 163 countries in the model. Extremely small countries that have no effect and that would only make the model even larger are omitted. There are half a million equations (most of which involve many variables) in the model already, and this seems to be close to the limit of what my aging laptop can handle. Further details about the model are explained in the previous episode, of this series.

Depending on the parameter settings, the model produces very different results, but all parameters, have credible ranges – moving outside those is unlikely to produce credible predictions. Even this gives an infinite number of combinations of parameter settings. Model 4 has more than 40 parameters and many other aspects of the model can be changed in other ways. To reduce the number of scenarios to a manageable number, these parameters need to be grouped. In case of model 3, I used three groups of parameters with three settings (low, medium, and high) for each, resulting in 33=27 scenarios. I’ll use the same approach here. The three groups of parameters are the following:

The table below gives three numbers for each of the 27 combinations of low, medium, and high settings for these three groups of parameters. The first number is the approximate year in which carbon-neutrality will be reached (or approached, if the scenario never really gets there). The second number is the part per million (ppm) of CO₂ equivalent in the atmosphere at that point. The third number is how warm it will get due to that amount of CO₂ in the atmosphere.4 So, for example, right in the middle of the table you can find the results of the scenario “medium CIW, medium SEI, medium MRC”: “2130, 550, 3.0”, meaning that carbon-neutrality will probably be reached around the year 2130, at which point atmospheric CO₂-e will be 550ppm, resulting in approximately 3.0°C of warming (with the usual uncertainty margins and other caveats).

These numbers are a bit lower than in case of model 3, but otherwise most conclusions are the same. Most importantly, low CIW – that is, less drought etcetera caused by global warming – leads to more emissions and thus more warming. The worse the direct effects of climate change turn out to be, the faster we’ll reduce emissions. The reason for this is that more severe drought etcetera leads to more severe economic decline and more famines, civil wars, and so forth, and those are the main causes of emission reduction. Peaceful, voluntary reduction is possible in principle, but unlikely to be sufficient. Peaceful scenarios assume that people quietly and passively undergo economic stagnation or decline (and the consequent collapse of capitalism, which cannot survive without economic growth), famine, drought, and “natural” disasters. They assume that people just stoically die without protesting, and without even trying to survive (by fleeing or fighting, for example). That assumption is obviously absurd, and most scenarios without this absurd assumption (i.e. scenarios that assume that people will flee, fight, riot, and so forth) suggest that social and economic collapse plays a bigger role in reducing CO₂ emissions than any concerted effort at reduction.

The various scenarios can be combined by assigning probabilities to them and “adding up” their probability curves as explained in the previous episode. I’ll skip most of that explanation here and fast-forward to the results. The thin black lines in the following graph show the probability curves for different increases in global average temperature for each scenario in the table above. The shape of these curves is based on those given by Sherwood and colleagues in their climate sensitivity paper.5 The surface below each curve is proportional to the probability of that scenario. The thick yellow line is the combined probability curve.6

However, what these numbers (as well as the numbers in the table above!) ignore is that warming caused by us may trigger further warming in addition to what is already taken into account in most climate models. Passing certain tipping points (like Amazon die-back) and certain climate feedbacks that are usually omitted from climate models because they are hard to predict (such as permafrost melting) will add a bit of extra warming on top of what the standard climate sensitivity curve predicts. How much exactly is hard to say, but typical predictions are in the range of tenths of degrees to 1°C or a little bit more, with (much) lower probabilities for higher numbers (but also for very low numbers). Hence, there is another probability curve for additional heating due to these tipping points and feedbacks that needs to be multiplied with the curve based on Sherwood and colleagues’ paper to get an overall probability curve of average warming. If that curve is used (instead of the Sherwood-based curve), then the figure changes into this:

Taking tipping points and so forth into account, the combined scenarios of model 4 predict a median value of expected average global warming of 3.7°C, a 67% confidence interval of 2.5~5.6°C, and a 95% confidence interval of 1.6~8.3°C. This is, in my opinion, the most credible prediction available right now. It is, of course, a bit higher than IPCC predictions, but that is largely due to two factors. Firstly, the IPCC models do not take social feedbacks into account but instead assume highly simplified and more or less fixed social pathways. And secondly, the IPCC models are based on the assumption of widespread direct air capture of carbon (DAC), which is technologically and economically unfeasible and should be considered science fiction. Furthermore, there is a high chance that geo-engineering technology like solar radiation management will be used as an excuse for slower reduction, leading to even more emissions and an even higher level of average global warming. For that reason, the 3.7°C prediction may even be too low. For a discussion of this kind of scenario and other scenarios that don’t fit in the models presented in this series, see the sections “More ‘Exotic’ Scenarios” in the previous episode.

For now, my best prediction is that we will heat up the planet by about 3.7°C (67% interval: 2.5~5.6°C), and that this will imply (or involve) widespread famines, civil war, refugee crises, and societal collapse.

If you found this article and/or other articles in this blog useful or valuable, please consider making a small financial contribution to support this blog, 𝐹=𝑚𝑎, and its author. You can find 𝐹=𝑚𝑎’s Patreon page here.

“𝐹=𝑚𝑎” is a blog by Lajos Brons about philosophy, climate change, Buddhism, and whatever else he happens to be interested in. Lajos is a Dutch philosopher and social scientist living in Japan. His last two books, The Hegemony of Psychopathy (2017) and A Buddha Land in this World (2022) are closely related to this blog in style and content. For more information, see the “About” page and/or this site’s Privacy Policy.

Maintaining this blog costs money. Maintaining this blog’s author costs more money, however, and unfortunately, that author (i.e. me) doesn’t have it.
If you find this blog useful or valuable, please consider making a small financial contribution to support 𝐹=𝑚𝑎 and its author. You can find 𝐹=𝑚𝑎’s Patreon page here: https://www.patreon.com/fisma.